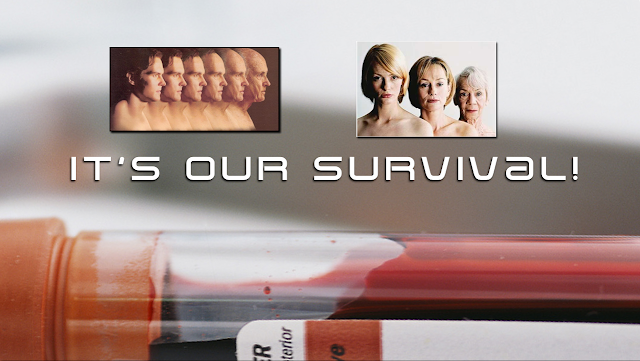 Of course, there are many problems in the world. So people freak on Pollyanna -- but bail on optimism? Why? People just know. True things. Horrendous stuff. Horrific stuff.

Like ... one in ten girls is molested globally. Two billion people are nutrition compromised. Farming is fossil fuel dependent -- which acidifies our oceans. CO2 is at a three million year high. Future flooding will displace almost a billion people.

And then, there's always that asteroid or the super volcano. Amen sister. God is coming and she's pissed. But don't buy it. They're crazy.

So why? Most of us 50% college educated types, are sick of apocalyptic excuses to scare us. I mean, the majority of people you talk to want new tech and change. Right?

The power is shifting. The young aren't as backward. The roosters are roosting. Lord have mercy!

But then there's that old school corruption excuse. And it's real. You might as well give up.

Our leaders are bought. Dinosaur industries rule. We're monitored online.... All true. (Basically because greed and fear blew up our financial system, then, corrupted our institutions to retain power. Maybe after they planned it. Probably.)

So we feel powerless. And too many of us give up.

Then, without a fight, the amazing technologies go nowhere. Like solar, staying in the gigawatts, instead of the terrawatts for so long. Put it off for the money. Keep it small scale. We all know....

But the tech is there. The numbers and plans are out there.

The Rocky Mountain Institute, Tesla Gigafactory, Regenerative Med, MIT Tech Review. People know what's happening. The news is there. They just go online and look for it. And people are going online. And fighting the power. Because ...

As RK (Raymond Kurzweil) technological progress occurs exponentially. Remember? The Human Genome Project ramped and accelerated in the final year and beat the naysayers completing on time. And the advances in communication, iPods, smart phones. The transport, like Google cars, driving themselves (and Mercedes and BMW too.) Moore's Law and the computer processing power continuing to double, despite the naysayers. And IBM Watson AI, beating very smart humans.

We should be more excited. After all. We are the most educated planet ever. We're richer. Just like Elvis. We are the queen.... 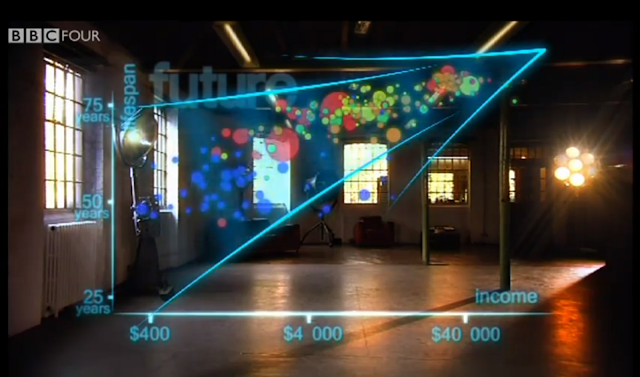 Here Swedish statistician Hans Rossling shows us our collective happier progress. The reality? People are wealthier than ever.

Poverty has actually decreased as a percentage over time. Another of Rossling's charts shows that, in most developed countries, populations are shrinking too.

The U. N. predicts that by mid century, after Two billion more people are added, global population will begin shrinking.

Plus, the world's carrying capacity is more than twice the current population. Smart planning, is of course, mandatory. But continuing advances in wealth and tech, because of democratic planning, will make the world better.

A small fraction of the sun's power can run the entire planet. And that's just solar. We have wind and geo-thermal. And we can always split water for hydrogen. We have plenty of ocean and sun.

So as the oceans flood our coasts ... and desertification continues, desalinization gets cheaper. And there's more solar power.

So all ain't lost.

We'll use the technology.

Sure, it'll be sad for a while. It seems like we've gone into a new dark ages recently. But it will happen. Because living is good. People enjoy our life. So we'll survive. No matter what (barring 100,000 year asteroids).

Even the worst case scenario continued CO2 increase and geo-engineering: sulpheric acid and green sky poisons us in 100-300 years. It's definitely possible. So it's interesting that aerospace companies are getting SO3 to form in the atmosphere using aerosols in jet fuel. SO3 reflects back the sun's short wave radiation. Less greenhouse effect and the poles melt more slowly. (Thanks to Greg Benford of UCR possibly and smart NASA types.)

So a new way of fueling our aircraft could give us a long time to get the new infrastructure green.

Geo-engineering is already going on -- at places like Harvard. (TED Radio Hour) And this will give us time to use un-imaginable tech -- like nano-sequestration or the Atomically Precise Manufacturing that Eric Drexler at Stanford mentions. Radical clean abundance via nanotech -- one of the possibilities if our climate begins to collapse. So we don't have to have constant acid rain and runaway extinctions from pollution. We have the tech to stop it.

The doomsayers are wasting our time right?

I mean, it's good we have concerned people keeping us real....

But we have to make the positive things happen by thinking. They can happen. We have to be the change. Act locally, think globally like we were taught in college.

So people are turning off the boob tube for YouTube. Leaving the paranoid crime report and getting some exercise. Something that makes you feel good. So it's happening.

Young educated people now prefer music and the internet to network media. This is real. This is happening.

Harvard professor Steven Pinker says that even violence is going down -- as a percentage. Like how wealth advances. Taxed as an amount, not a percentage. Hehe. A guise the wealthy have mastered. But the 99% have more wealth. So we'll adopt the new technology regardless. Just depends how fast we want it.The dinosaurs are holding on but will shift right with us, just slowing us down.

Until then ... it's divide and conquer. Total whaleshit. Scaring us for ratings -- and gridlock. Advertising revenue. We know. It's our world too.

Peter Diamandis in his "Abundance" book and TED Talk illustrated this nicely. That we're prisoners of our amygdala, the ancient lizard brain. Fear takes precedence. Our survival response forces us to listen to scary things -- even if they're whaleshit (paraphrasing). Of course as you know, it's ratings. Advertising revenue, winner take all. Except it's not all. More like 20% of the overall wealth. The true wealth is the people power to change governments and shift resources democratically.

The 1% just give in bigger chunks. Why millions of people are watching them so closely and we know this stuff. Smart people developed the internet, in the beginning. For everyone.

So we won't be tricked forever. Logically speaking. The rich will save us. Out of self-preservation -- even the few that aren't happy and nice. Their Rasputans will be reigned in. The dirty workers. Or we'll all lose and die.

So I think, based on the news, extreme youthspan™ is ours.

Of course there will be obstacles. Lifestyles will change. Kids cost money.

Personally, I think people will continue having less kids.

The future will be virtual. The Human Brain Project, uploading, wetware, microfluidics etc....

So by the time population is a problem, there will be amazing simulated reality.

We'll punt The Cam or watch concerts, fly or whatever. And it will all seem real! Hollowdeck style, but indistinguishable from reality -- and open source. Much of it. Or it won't be implemented for long. People are already pissed as hell about specious upgrades. Linux, Open Cog, Open Source, Wikipedia and many other examples of voluntary giving.

The future is bright. We have to remind ourselves.

Sure, every 100 million years we'll get a Yucatan sized asteroid. Hehe. That could set us back. And there will be migrations, corruption, depressions, maybe nuclear fallout -- horrific and "shortsighted" Tepco reactor disasters, old boy's bribery. Natural disasters, economic "structural problems", debt slavery and greed. Fast food mutant dictators (Which is why we need a healthcare revolution so we don't go broke from the $70T Boomer healthcare tab.). But the bottom line is, we don't want to die.

Why should we accept being worm food?

It's the most important choice that we face.... Hehe. So ... live long and prosper.... Walk light and long.... Carry a big stick. Shake your groove thing. Bring 'em a smile.

Personally, I wanna be here -- at least, not suffer, from degenerative diseases.  When we don't have to. For greed? Are you kidding? The greed is on board.

I mean, bio-identical organs being grown and printed right now! Some manufactured organs have already been installed.

New Organ and The MPrize, X-Prize and others advancing medicine.

All the top schools with regen med programs. Name one. So many advances!

A printed skull was implanted in Holland. Wake Forest, implanted vaginas -- way back in 2006. And they work! Girls with congenital defects in Switzerland and Mexico made whole again. Things like Arthritis -- gone with stem cell biogels soon.

VICE on HBO opened the season with several cures to cancer. They Mayo Clinic. Yeah. Those kind of pockets participating. Polywogg and the other investment funds. Progress is everywhere.

Sure, the television will continue scaring us. That's how mega corporations make money. We buy more stupid high margin crap the dumber we are.

But people are getting smarter ... and smarter. Fear not. Even if they piss you off. Which they will. They've targeted me. On my computer. But that's our freedom too.

So the basic philosophy of fellow Lifeboaters and futurists is, if you live toward the future, there is a future.... And in 3 billion years when the sun burns out, we'll be elsewhere in the galaxy sailing solar winds as information and energy.


*(If any of this is interesting, you'll love "The Singularity is Near", "Abundance" and "Cradle to Cradle".)